A 50-year-old Northern Rivers woman had her severity appeal dismissed and prison sentences upheld in Lismore District Court last Friday in relation to multiple animal cruelty convictions for failing to provide food, shelter and veterinary treatment to severely emaciated horses under her care.

On 29 August 2017 at Casino Local Court, the defendant pleaded guilty to four offences of animal cruelty in relation to failing to provide proper and sufficient food and water, shelter and veterinary treatment to a horse in her care. She received a sentence of cumulatively $6000 in fines (of which only $74 had been paid at the time of hearing) and a two-year good behaviour bond in relation to these matters.

Six months later, the RSPCA received another cruelty complaint in relation to her Bottle Creek property and upon attending inspectors found an emaciated mare and foal. On 29 August 2018 at Casino Local Court, the breach of the original good behaviour bond was called up, and she was resentenced to a three-month fixed term of imprisonment. That same day, she pleaded guilty to three additional offences of animal cruelty relating to an emaciated foal. For offences of failing to provide proper and sufficient food to the foal, and failing to provide veterinary treatment, she received a three-month fixed term of imprisonment, partially concurrent with the first fixed term. The total term of imprisonment was four months.

She then appealed against the severity of the sentence imposed to Lismore District Court, where two other unrelated severity appeals were also heard together.

Judge Wells dismissed the appeal and confirmed orders of the Local Court, including orders for the payment of veterinary treatment costs of $5690.65 for the first prosecution and $1922.00 for the second prosecution. The horses the subject of these charges were ordered into RSPCA NSW custody, and Ms Braid was prohibited from purchasing, acquiring, taking custody or possession of any animal for five years.

The first set of cruelty charges related to a severely emaciated horse between October and November 2016. After seven weeks in RSPCA care, the horse’s health improved markedly and it gained 119 kilograms.

The second set of cruelty charges related to a severely emaciated recumbent foal with numerous untreated lacerations and injuries. Dehydrated and unable to stand, the foal was seized and transported to a veterinary clinic for immediate treatment. In just eight days of RSPCA care, the foal’s weight increased from 55.9 kilograms to 80.4 kilograms. The mare had been unable to produce milk. 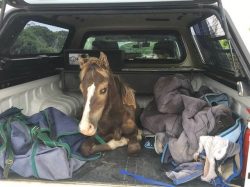 The emaciated foal unable to stand. 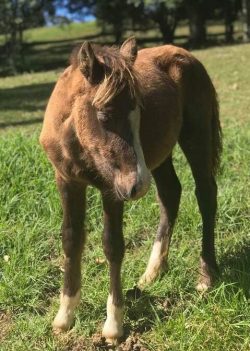 The foal in a vastly improved condition, taken in June 2018, who has since been rehomed. 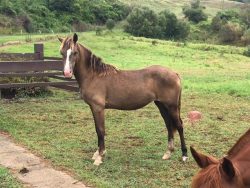 A recent photo of the healthy filly.

She said, “Any person, particularly anyone with experience in horses, can tell that the animals were in appalling condition. It’s remarkable the animals survived at all.”

RSPCA NSW Chief Inspector Scott Meyers said this was a complicated matter and that he was pleased with the outcome.

“Horses are intelligent creatures who require a certain level of care and attention from responsible owners. The conditions these animals were found in were inexcusable. The dramatic recoveries the horses made under RSPCA care indicate just how dire their situations were. These animals are fortunate to be alive.”

“We hope this sends a message to the community that persistent neglect and cruelty to this extent can and will be treated as very serious matters occasioning imprisonment.”

Her appeals for unrelated police matters were also dismissed.