A 68-year-old Strathfield man was sentenced at Parramatta Local Court on 10 February 2022 for conduct relating to eight brachycephalic dogs, which he bred and kept below the premises of his wife’s veterinary clinic in Blacktown.

The man pleaded guilty to failing to provide veterinary treatment to six of the dogs for a variety of conditions, and to committing an act of aggravated cruelty against three of the dogs, for whom his failure to provide vet treatment resulted in serious disablement. A further offence involving multiple violations of the Animal Welfare Code of Practice – Breeding Dogs and Cats was also taken into account on sentence.

On 8 May 2020, RSPCA NSW inspectors and a RSPCA NSW veterinarian attended the Blacktown property in response to a complaint about the condition of French Bulldog puppies the defendant had advertised for sale on Gumtree.

While the upper level of the property operated as a veterinary clinic, a breeding facility occupied the lower level garage area, housing a total of ten dogs. There was no form of temperature control inside the garage and, once the doors were closed, no ventilation. At the time of the inspection, the animals were being kept in darkness and in a hazardous environment that did not comply with the relevant Code of Practice.

The dogs were found to have a range of untreated veterinary conditions including dermatitis (a condition exacerbated by features like excessive skin folds), fly-bite, ear infection, a fractured tooth, and roundworm. Significantly, six dogs were suffering from brachycephalic obstructive airway syndrome (BOAS) for which treatment had not been provided, causing them constant breathing issues.

These dogs underwent surgeries to relieve various respiratory obstructions arising from BOAS, including procedures to widen their nostrils, shorten their soft palates, and remove soft tissue masses blocking their airways. BOAS was most serious in three French Bulldogs whose conditions had been allowed to deteriorate to the point of serious disablement, with irreversible structural changes to their airways. 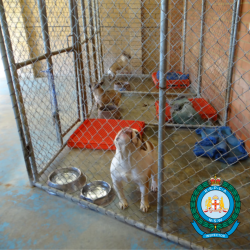 Even after specialist care, these three dogs remain at risk of respiratory collapse and require lifelong accommodations such as exercise restriction, ambient temperature control and careful weight management to ensure their welfare.

On 14 May 2020, the defendant surrendered all eight dogs to RSPCA NSW.

The Court sentenced the defendant to an 18-month Community Correction Order subject to standard conditions, and fined him a total of $14,000.00.

Magistrate Grogin ordered the defendant to pay animal care costs of $15,000.00 and professional costs of $3,524.91 to RSPCA NSW, while also disqualifying him from owning or keeping any animal for five years.

“The conditions these dogs were living in were unacceptable, and considering where the offence occurred, you would expect more from someone close to the profession of animal welfare,” said RSPCA NSW Chief Inspector Scott Meyers.

“Putting profit before the health of animals will not be tolerated.”