Amendments to the Animal Research Act (1985) passed by the NSW Parliament today,  which will give cats and dogs used as research the right to be released into family homes, have been welcomed by the Royal Society for the Prevention of Cruelty to Animals New South Wales (RSPCA NSW).

The Animal Justice Party’s ‘Right to Release Bill’, known as ‘Buddy’s Law’, will give thousands of animals used in medical experiments a second chance at life rather than being killed at the research’s conclusion.

“We would like to congratulate the Hon Emma Hurst MLC and her team for drafting this bill, and Alex Greenwich MP who took carriage in the Legislative Assembly, helping to give all creatures great and small a voice in the NSW Parliament. We’d also like to thank the NSW Government, in particular, NSW Premier the Hon Dominic Perrottet MP, and Minister for Agriculture the Hon. Dugald Saunders MP, for supporting the principles of these vital changes to the legislation.

“I’d also like to personally thank Patrice Pandelos, who is a loyal member of RSPCA NSW, and of course, the owner of Buddy, a Beagle who was subjected to scientific experiments for the first eight years of his life. Patrice’s drive and determination to improve the lives of animals like Buddy is a testament to her passion for animal welfare, and we are incredibly proud to have her as a member of our community.”

RSPCA NSW is looking forward to collaborating with the NSW Government, the Department of Primary Industries, research organisations, and fellow animal rehoming groups, on the implementation of the ‘Right to Release Bill’ over the coming months.

These changes once again show the reliance of the NSW Government and the state’s community on animal rehoming charities and organisations like RSPCA NSW, and we continue to advocate for additional resourcing to help rescue organisations care for all creatures great and small.

For photos and grab interviews of Steve Coleman and the Hon Emma Hurst MLC, contact RSPCA NSW Media on 0488905353 or email media@rspcansw.org.au 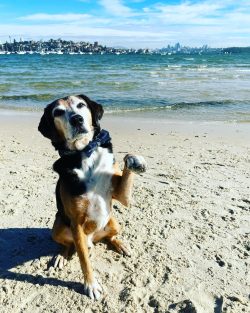