45 year old female Goulburn resident  has been convicted of committing an act of aggravated cruelty after her German Shepherd ‘Buzz’ starved to death. She admitted that she often left Buzz when she was away on escorting jobs, and although knew he was skinny, had not sought any veterinary treatment.

She failed to appear in Goulburn Local Court on Wednesday 9 May 2018 and was dealt with in her absence. She was convicted, fined $8,000 with moiety awarded to RSPCA NSW, and ordered to pay S30A veterinary costs of $634.30.

A post-mortem found that Buzz was subjected to chronic starvation and stress for a period greater than two months, and died as a result of emaciation, and intestinal torsion caused by a perpetually empty gut twisting in around itself.

“There are not many cases that leave you speechless, but this is one of them,” comments RSPCA NSW Acting Chief Inspector Andrew Clachers.

“To see a dog so weak he’s unable to stand, and learn the owner knew about it but chose to do nothing, it’s nothing short of heartbreaking and distressing. And despite all veterinary efforts, to have a dog starve to death because it was too late. There are no words for that.” 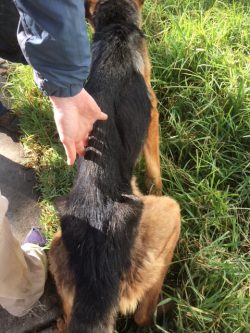 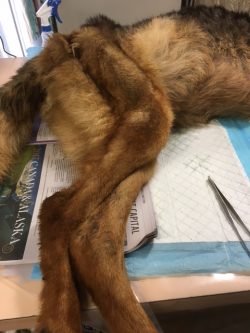 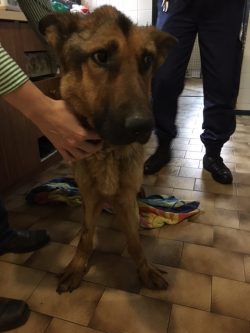 On 18 May 2017, RSPCA NSW inspectors attended a Goulburn veterinary clinic after receiving a call about  an emaciated German Shepherd that had been brought in by council rangers.

On arrival the inspector could see the dog was in emaciated body condition, with his entire skeletal frame evident. He could only stand with the assistance of a towel placed under his belly and the ends held by two people to hold it up. Fleas were crawling over his body and he smelled of faeces. He had an intravenous drip attached in an effort to hydrate him. The dog weighed less than half his normal body weight.

RSPCA NSW inspectors made contact with the45 year old female via phone after attending the residence to find no one home. She said she had gotten the dog for free off Facebook, and admitted that she knew her dog was skinny but hadn’t done anything about it.  She later surrendered her dog to RSPCA care.

Despite receiving extensive emergency veterinary care, on 23 May 2017 Buzz died, the postmortem revealing a combination of chronic starvation and an intestinal torsion as the cause of death.