36-year-old male was convicted on 29 April 2019 at Picton Local Court for multiple serious animal cruelty offences in relation to the 4,000 hens on his commercial egg farm.

He was convicted and fined a total of $6,500.00 with half to be paid in moiety to RSPCA NSW. He was placed on a 16-month community corrections order and prohibited from purchasing, acquiring, taking possession or custody of any animal for a period of five years.

Half of the birds in the shed had a respiratory disease with mucoid discharge from the nares and mouth. Most of the birds were in underweight to emaciated body condition. All the birds had severe lice infestations and appeared to be hungry and very thirsty, spending most of the time attempting to drink from the nipple drinkers and search for food.

Multiple animal husbandry problems were identified in the shed, including poor ventilation, poor substrate, broken feeders and water pipes, and dangerous wire causing the birds to become trapped and the deceased bodies left to decompose amongst the hens.

20 birds showing the most severe symptoms were caught and assessed, with 12 found to be emaciated, have chronic respiratory issues with mucoid discharge from the nares and mouth. One bird was covered in mud and excrement, was very cold, and struggled to breathe. It was deemed cruel to keep them alive and the 12 were humanely euthanised.

A post mortem examination of one bird revealed a positive result for Infectious Laryngotracheitis (ILT), a highly contagious respiratory disease that has a mortality rate of up to 70% in poultry. There is no cure for the infection and the birds become carriers for life.

He was issued directions to immediately provide sufficient food, water and veterinary treatment to the 4,000 birds. The shed needed to be cleaned to reduce the faecal soiling, dust and ammonia to reduce the risk of worsening the flock’s respiratory infections and the re-infestation of lice.

RSPCA NSW inspectors attended the property nine more times over the next 13 days, including four times with the District Veterinarian, twice with the avian veterinarian, and once with an industry consultant to monitor compliance with the directions issued by the RSPCA.

Further inspections and veterinary assessments found that there were still marked signs of respiratory disease, emaciation, weakness and lice infestations throughout the flock.

After having sought advice from the LLS and expert avian veterinarians and taken into consideration the significant biosecurity risks presented to other flocks and industry, he consented to the LLS for the euthanasia of the flock. This was carried out by a private contractor on his behalf.

Magistrate Cheetham said the situation was objectively serious, and the consequences of the defendant’s decisions “resulted in 4,000 euthanised animals.”

“You took on these responsibilities and did not meet them. There have been consequences for you, but the sentence needs to reflect community expectation.” 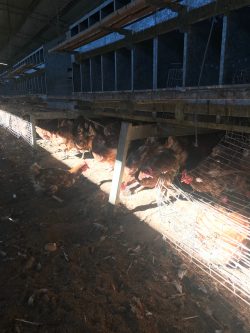 Photo of the centre nesting boxes in disrepair. 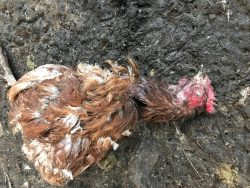 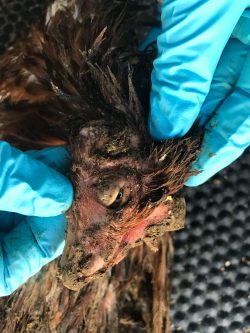 RSPCA NSW Deputy Chief Inspector Aaron Purcell said, “The risk for disease, parasites and suffering is particularly high in an intensive farming environment. It is incredibly important that the owners and operators of intensively farmed animals have systems in place which ensure for the provision of proper and sufficient food and water, and for the animals to receive necessary veterinary treatment in order to maintain a certain welfare standard throughout the entire population.”

“This was a complicated case for the Inspectorate and we are pleased to have reached this Court outcome.”