A 35-year-old Greenwich man was sentenced at Parramatta Local Court on 30 August 2022, after pleading guilty to five cruelty offences against his 10-month-old Dobermann, ‘Ohlins’. Four further offences relating to the inappropriate confinement of the dog were taken into account on sentence.

Video footage filmed by a witness was supplied to RSPCA NSW depicted the defendant kicking Ohlins on multiple occasions, threatening and prodding the dog with a hammer, lifting him by his collar, throwing him to the ground, and confining him to an inadequately sized crate.

On 7 July 2021, RSPCA NSW Inspectors and NSW Police visited the property of the defendant. Initially, the defendant denied any allegations of cruelty, claiming that he would try to “warn” the dog to “shut up” and stop barking by kicking him, lifting him up by the collar, and threatening him with a hammer.

The defendant was asked to produce the hammer used to threaten Ohlins, which was kept inside the dog’s enclosure in the backyard. When the defendant walked inside the mesh cage to retrieve the tool, Ohlins cowered and scurried away in fear.

The Dobermann and the hammer were seized and transported to RSPCA NSW Yagoona.

In the expert opinion of the examining veterinarian, Ohlins was subjected to unjustifiable physical and psychological abuse, torment, and torture in the video footage. Evidence of Ohlins trying to repeatedly escape the defendant demonstrated that the dog was clearly terrified. All these actions constitute acts of cruelty as defined by the Prevention of Cruelty to Animals Act 1979 (POCTAA).

Ohlins was subsequently surrendered to RSPCA NSW and has since been transferred to a Dobermann rescue group. 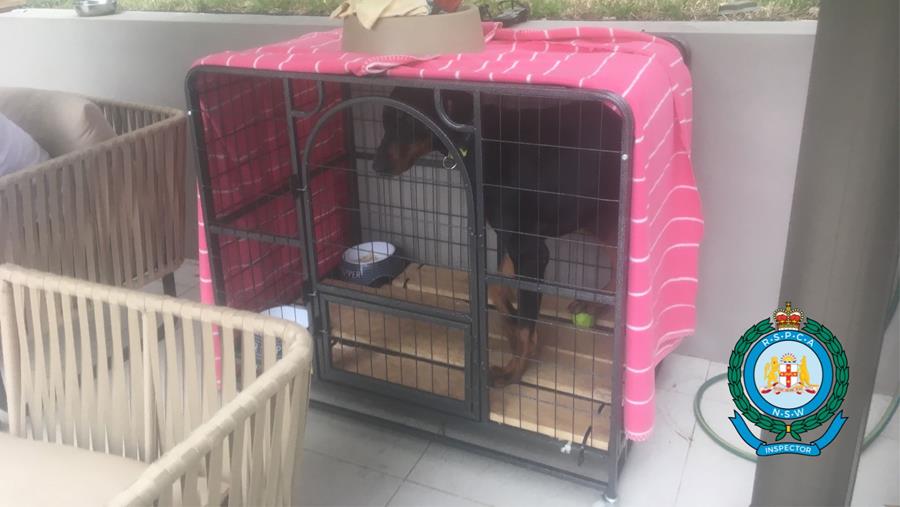 After the sentence proceedings had commenced, the defendant made an application under section 14 of the Mental Health and Cognitive Impairment Forensic Provisions Act 2020, asking to be dealt with under that legislation instead of POCTAA. On the question of whether the defendant had a relevant mental health impairment, the Court found that evidence of a diagnosis was very tenuous.

With all factors considered, including the repeated and deliberate nature of the offences, the Court refused the application. The Magistrate was not satisfied that the community’s interests would be better served by diverting the defendant into treatment, as opposed to sentencing him in accordance with the criminal law.

The defendant was sentenced to three Community Correction Orders (to be served concurrently), with the longest operating for two years. Significantly, the Court disqualified the defendant from owning or keeping any animal for five years.

The defendant was also ordered to pay a sum of $4,640.58 in animal care costs to RSPCA NSW.

“We are incredibly grateful for the vigilant witnesses who came forward and reported this case. This investigation highlights the powerful role that the community plays in helping end the suffering of animals and is a timely reminder to always trust your instinct and come forward if you witness suspicious behaviour,” said RSPCA NSW Chief Inspector, Scott Meyers.

“Every animal deserves to live in a safe and loving environment. One phone call could literally save the life of an animal, like Ohlins, and give them a second chance.”