A 28-year-old Penrith man was convicted and sentenced in his absence at Penrith Local court on 23 June 2021 for multiple offences of animal cruelty.

These charges relate to five separate incidents of cruelty which included the man whipping, dragging, kicking, punching, and throwing a white and tan Staffordshire Terrier in his care.

On 27 October 2020, RSPCA NSW inspectors attended the Penrith property with NSW Police, following reports of the man repeatedly punching the dog in the head and flinging it over a gate by the collar.

After being cautioned by an RSPCA NSW inspector, the man admitted that he was the owner of the Staffordshire Terrier and alleged that he was disciplining the dog by smacking it.

RSPCA NSW inspectors witnessed the dog crumple to the ground and cower in fear when in the presence of the defendant.
The Staffordshire Terrier was seized for veterinary assessment where evidence of muscle damage as a result of trauma was discovered. The dog had been tormented to the degree he was terrified and displayed fearful behaviour towards men. 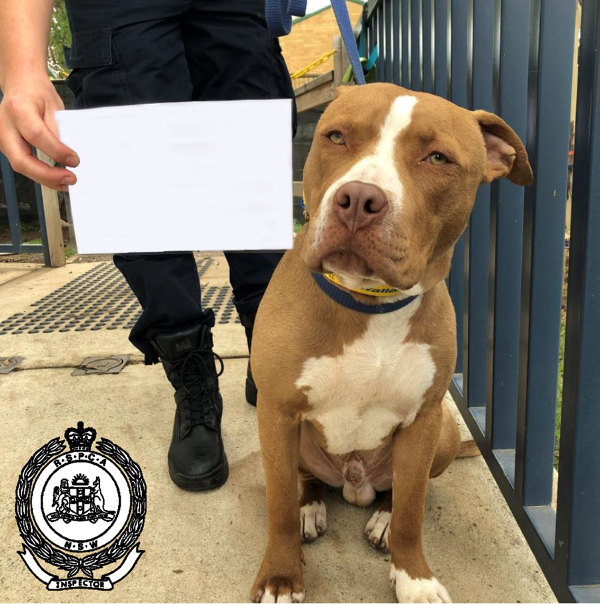 Hercules the Staffordshire Terrier with an RSPCA NSW inspector

The man was convicted and fined a total amount of $2100. He was also ordered to pay $9370.50 in veterinary treatment and shelter costs. Magistrate Van Zuylen, sitting at Penrith Local Court disqualified him from owning any animal for 5 years and ordered to report to Penrith police station for fingerprinting.

The male Staffordshire Terrier, named Hercules, was forfeited to RSPCA NSW where he is currently undergoing behavioural assessment.

RSPCA NSW Chief Inspector Scott Meyers said, “Pet ownership is a privilege, not a right. All animals deserve to find a home where they are safe from harm, especially from their owners.
“RSPCA NSW recommends training to be based on positive reinforcement, there is no excuse for physically abusing your pets.”

Since 1928, the RSPCA NSW Inspectorate performs a statutory role in enforcing state animal cruelty legislation. Over 30 dedicated inspectors investigate complaints against all types of animals, in all kinds of situations. The Inspectorate exists first and foremost to help people help their animals, and it is their intent to keep animals with their owners when it is in the animal’s best interest to do so.  They are empowered to deal with serious animal cruelty offences by the use of statutory powers and enforcement action.