RSPCA NSW has gifted a specially trained Irish Wolfhound crossbreed, named Teddy, to a disability facility in Sydney’s north. This is the second time Venee Burges House has welcomed an RSPCA animal into their home. Tyson, a Kelpie German Shepherd crossbreed, entered the lives of the Venee Burges House residents in 2008, and lived a happy life there until when he passed away last year at the age of 13.

Venee Burges House resident Judith Geppert, who was Tyson’s owner, says he has left an enormous hole in her life and in the lives of those around her. “We miss him every day,” she said. “He was a one in a million, the best form of therapy we could possibly have had and he didn’t even know it!” 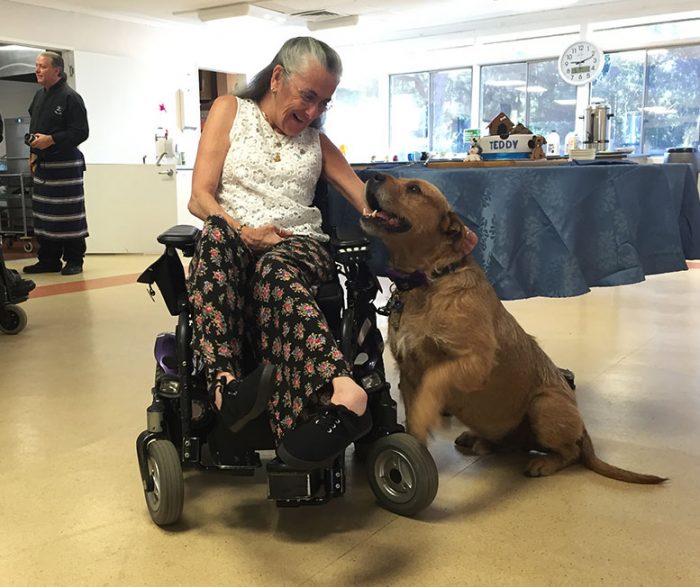 “I will always have a soft spot in my heart for Tyson, but now I have a chance to give Teddy a new life, and I have a renewed sense of excitement and purpose,” Judith concluded.

As with Tyson, veteran dog trainer Steve Austin has donated his time to work with Teddy to prepare him for his new home, focusing on calm behaviour and impeccable manners.

RSPCA NSW CEO Steve Coleman said there are enormous benefits to canine company. “We see it time and time again,” he said. “People who may be reluctant to socialise and become isolated just light up when there is an animal in the room. I don’t want to imagine my life without animals, so why should others who are living in care facilities have to?”

John Ajaka, NSW Minister for Disability Services, said having a dog like Teddy in the home would have a positive impact on its residents.

“I know that Teddy will bring so much joy and happiness to Judith and the residents of Venee Burgess House,” Mr Ajaka said.

“I thank the RSPCA for their generosity and for giving the residents the opportunity to enjoy the many benefits companion dogs can bring.”