It’s 1940 in the harsh Libyan desert. Private Jim Moody of the 2/1st Machine Gun Battalion stumbles upon a starving, abandoned pup on a sand dune. Amidst the rage of WWII, the Australian soldier clutches the whimpering puppy to his chest and names him Horrie.

After being quickly adopted and loved, Horrie would excel beyond being a simple mascot. His slightly larger ears would pick up the hum of enemy planes two minutes before any soldier. This sensitive hearing repeatedly saved the lives of the battalion’s one thousand men. Just before a deadly bombing, his signal of sitting, barking and then dashing for the trenches, would give precious time for all the soldiers to run for cover.

Like Horrie, thousands of animals have loyally served alongside Australian troops throughout decades of global conflict. Remembrance Day is not only about who we have lost, but what we stand for. It’s about honouring those who have served and continue to.

Throughout history, dogs are one of the most common animals found on our fronts. In WWI, Australian Military forces used German shepherds to guard valuable military equipment. In Vietnam, dogs joined combat tracker teams to find enemies in the dense jungles. Throughout our years of combat, dogs would sniff out mines and find the wounded. They have carried messages, laid telephone wire, transported ammunition and medical equipment. They have relentlessly served with joy, devotion and dedication.

In 1943, the Dickin Medal was created as an equivalent to the Victoria cross, awarding acts of heroism and bravery. This revered bronze medal inscribed with the words ‘For Gallantry’, was first awarded to three pigeons that served in the Royal Air Force during WWII. White Vision, Winkie and Tyke were recognised for transporting messages to rescue an aircrew in danger. 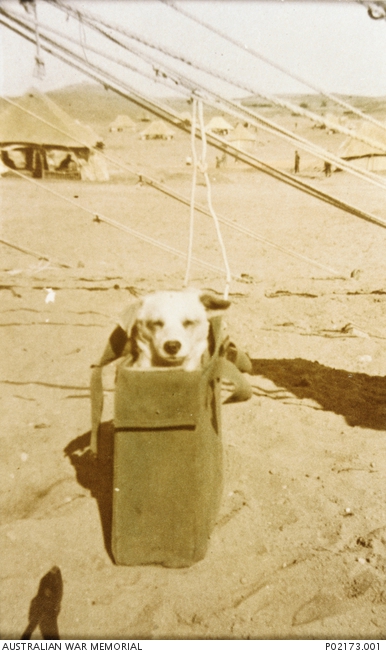 Looking beyond birds and dogs, horses have transported troops, fought on fronts and hauled supplies, equipment and ammunition. More than 136,000 horses went with Australian troops in WWI, but only one, Sandy, returned home at war’s end.

Unlike Horrie, the majority of animals serving in WWI could not return to Australia. Instead, many have been forcibly removed due to previous quarantine laws or have died in combat. While many animals serve alongside our men and women, some have simply provided affection and companionship. During times of hardship, loneliness and the trauma of war, animals have proven to be a safe place for love and warmth.

In case you were wondering, little Horrie survived a boat sinking, bomb splinters and countless battles. He travelled with the Australian troops from Egypt to Greece, Crete, Palestine and Syria. As Japanese soldiers started to invade Asia, Moody and his comrades knew they had to join the fight. To ensure their furry friend would be safe, they smuggled Horrie onto a troop ship back to Australia.

Today, we remember our men and women. Today, we also remember their faithful companions.